Skip to main content
How to guides Community resources

If your team is planning to use the Home Office design system production framework, you might consider having the developers create a blank 'app' within the project to make it easier to transform your prototype into a production application.

Step 1. Set up your GitHub repository

This is where your prototype code will be stored.

Log into your GitHub account and create a new blank repository. To give an example, we'll name the repository review-licence-applications.

We'll connect this blank repository with the prototype you'll create in the next step.

Run the prototype generator in terminal

Open terminal and enter these commands:

This does two things: it will create your local repository and link it with the remote GitHub repository you set up in Step 1. The last line will generate your new prototype.

The prototype generator will ask you some questions before generating the prototype. Accept the default prompts by simply pressing the 'return' key in terminal.

Pull down the dependencies

After the prototype has been generated, you'll need to pull down the dependencies to make your prototype work. Do this by running:

Commit and push your new prototype to GitHub

Once installation is complete, you can push your prototype to GitHub by entering these commands:

When your terminal returns a message that says:

You can view the prototype by opening http://localhost:8080/ in your web browser. This will help you track changes locally as you build your prototype.

One of the ways you can deploy, or publish and share your prototype with others, is through Heroku.

Create an app on Heroku Run the deployment generator in terminal

In terminal, run the command:

The deployment generator will ask you some questions.

Do not enter your email, API key and app name details into terminal for security reasons.

Setting up secrets in GitHub

In your GitHub Settings, select Secrets on the left hand side menu. Click the button New repository secret. This is where you'll be entering the secrets you accepted in your deployment generator. 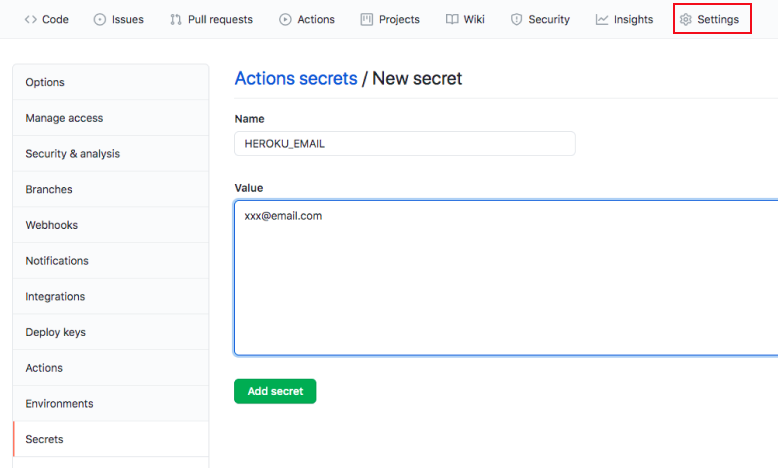 Each secret is made up of a name and value. Enter the names as displayed below with the relevant values.

Push your new deployment on Heroku

In terminal, run these commands:

This will build your prototype in Heroku and may take a few minutes. Once that is done, click on the Open app tab in Heroku to view your prototype. It will have a url like review-licence-applications.herokuapp.com which you can share with others.

After you’ve completed the last step to deploy your application, you must protect your prototype and make it secure. To do this:

Next: Building your prototype